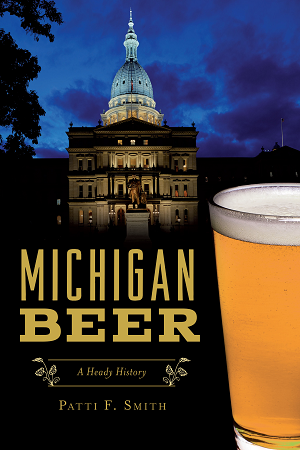 I’m excited to host Patti F. Smith for an online book talk and cocktail class featuring her new book, Michigan Beer: A Heady History. Michigan’s beer history is as diverse as the breweries themselves, and the stories behind them are as fascinating as their tasty concoctions. A few enterprising women found themselves at the forefront of early brewing in the state, and several early Detroit brewers also served as mayor. Pfeiffer’s mascot was designed by Walt Disney Studios. Jackson’s Eberle Brewing Company took its fight against local prohibition all the way to the Supreme Court, and the Silver Foam trademark embroiled disputants in a different legal fight. Renowned modern craft brewers grew from humble beginnings, often staving off financial disaster, to establish themselves as local, or even national, juggernauts.

Whether you’re a beer fan or a history buff or both, you’ll love this event! Patti is a long time friend, one of the most knowledgeable people about beer I know, and wicked funny too! She’s led Hops & History walking tours for me in the past, and I’m really excited to see her long awaited book to come life. This event will include presentation, discussion, and mix-along demonstrations of three different beer cocktails, with recipes sent in advance. Not in Michigan? That’s okay – you’ll still be able to mix along with your own favorite local brews!

If you purchase the book with your ticket, you’ll receive a signed copy, with books shipped the day after the event. Book sales and shipping are being provided Nicola’s Books/Schuler Books, so you’ll be supporting an independent bookshop!

Bookings are closed for this event. Space may still be available, call Tammy at 734-276-3215 to inquire.